We have been driving for a while in no mans land and can see as far as the horizon with no signs of human life anywhere. Very strange but as we are driving on these terrible rounds we hit 9000km that we have already driven on our adventure ! Yessss!! Onwards to our fifteenth country .

Welkome to Kirgistan! The border was very odd as we first had to get out of the car and open the bonnet of the car. They show us our brake fluid had spilt so must have gotten too warm during the last day. We then have to unpack the boot and open all bags with clothes where the soldiers with guns look in a bit and then ask if we have morphine. Tadjikistan's main export product is Heroin which is imported from Afghanistan and brought through Kirgistan so this is probably why the guards want to look at everything. We tell them that we don't have drugs and that seems enough information as we can now pack up our things again. We then go to a booth where one of the guards has taken a seat on the other side of the window and after asking the usual questions we get stamped in. And that was that. Easy peasy.

Fairly smooth roads and we are passing mountains that resemble a layer cake with all different colors layer apon layer. Very nice. And there are also numerous herds of horses, sheep, cows and goats crossing the road or just standing in the road. We've almost gotten used to this by now although it's much more here than in other countries. 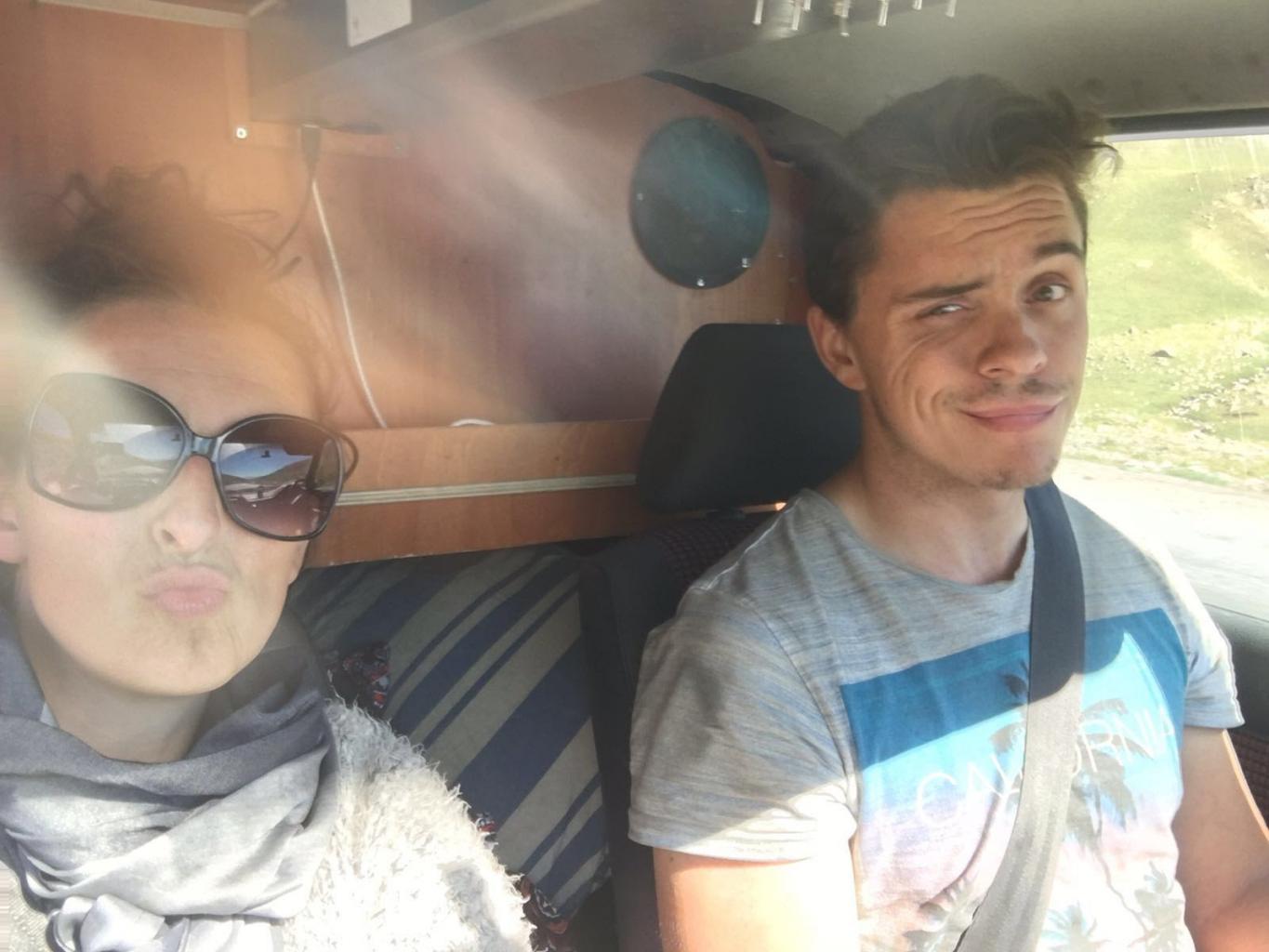 We just drove on a road with some loose stones on them. One of them hit the windshield cracking it. So we have a cracked front window now. Don't think we will be able to find a replacement or a fix, so just hope it won't get any worse. We also have been able to find a petrol station that accepts dollars so with a full tank we head on to Jalal-Abad.

The roads are still remarkably good and as Sas is driving Tom is even able to have snooze and catch up on some sleep. The scenery is extremely green, much more than we had imagined and it looks like there are a lot of facilities for citizens and the houses seem in better shape than in Tadjikistan so we think this country is doing alright. We haven't been able to spot THE country car although there are a lot of Hyundai and to a lesser extent Mercedis and Deawoo.

We arrive in Jalal-Abad and try to find a bank and somewhere to eat. We gave up on finding a bank after we got lost trying to find the town center and decided to have breakfast/lunch/dinner at an outdoors place that seemed welcoming. They didn't have any alcohol and after looking in The Lonely Planet found out that the majority of the population is Muslim which explains it. We had cola and great food and got a dessert on the house! We could even pay in dollars and get local currency, Somoni, back as change. Pretty good deal. 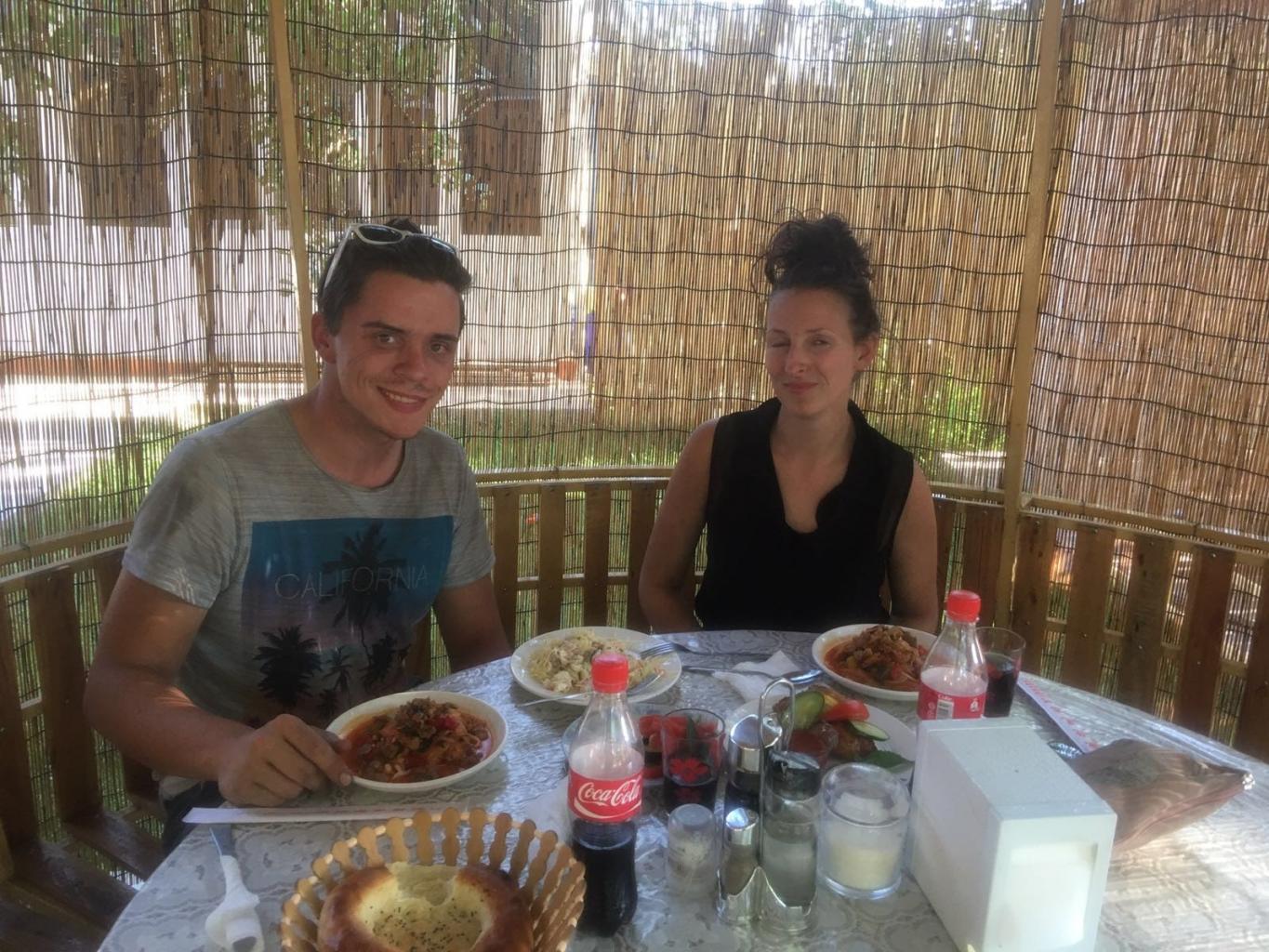 On the road again and will drive until late. We want to try and make it to Toktogul'Skoe lake tonight so we can wake up tomorrow and have a dive in! And also it would mean that we would have caught up time and can try and find a mechanic in Bishkek because Boris still does not seem happy. He is hanging quite low on his back wheels and every bump he is rubbing against the wheel housing. Amazing sunset though with a bright red sun going under and coloring the lands orange. 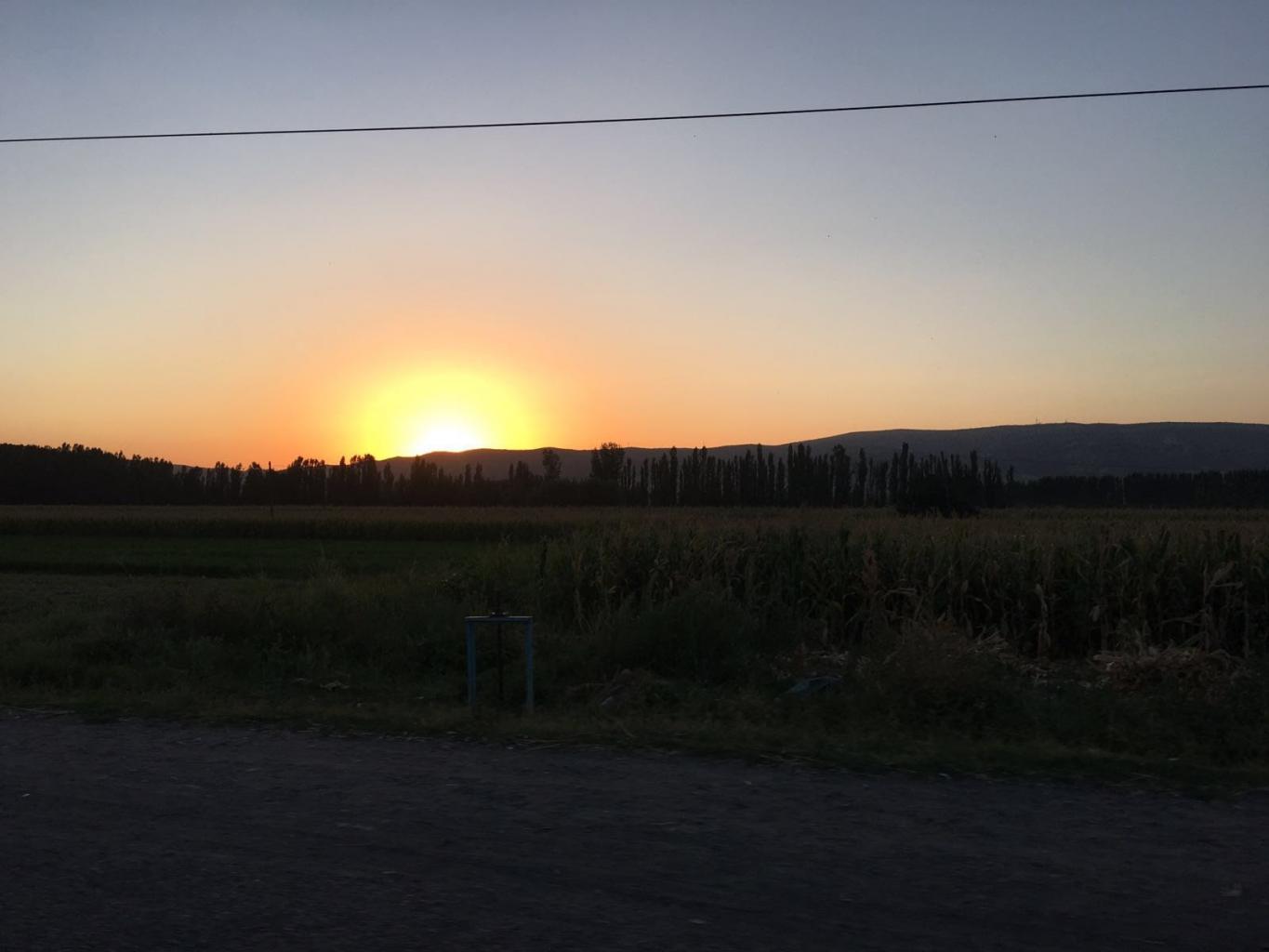 We have been driving for a while now without Tom's phone as his GPS won't connect. Saskia is now navigating oldskool with a map and compass which is going remarkably well. There is a persistent smell of petrol though.. Tom stops the car and checks but doesn't see anything wrong.

Still smelling petrol we decide to stop and check again and this time we see what's wrong; one jerrycan is leaking petrol all onto Boris and our former bed! We pour what's left of the petrol in Boris and the other jerrycan and try to clear up as best we can with water and toilet paper in the dark next to the motorway on the hard shoulder. We are now down to 1 jerrycan. At this rate we think we can probably fit everything we end up with at the finish in two hold luggage suitcases!

Just passed a toll road and have noticed Boris is making more noise than usual. His left rear is squicking like an old fashioned bed when we go over bumps and is kind of rattling in between the back wheels. And since we have made Boris lighter he is much more agile and half the time it feels more like gliding on snow or drifting than driving. Not sure if this is a good thing or bad thing.. Comments are welcome and you can reach us best through SMS ( wifi is a luxury not all counties have ).

After a brief night sleep we wake up on the side of a freeway again. Yesterday we drove in the night until we were tired and could not go any further. We've asked our car mechanics on call, Berry and Jeroen, for advice on what to do about our deceased, rear shock absorbers and they both replied that we could continue our journey with them being broken which was a huge relief. If we would be able to smile at this point we would. But we need to wake up first.

We get pulled over by the police due to speeding. Sadly this was the case; Tom, how was driving, said he saw the 50km sign but carried on driving 70km per hour. The cost, a whopping $200 which we did not intend on paying because we didn't have. We were planning on getting more dollars out in Biskek or Almaty and just had enough to make it to there. Saskia insists that we are not paying it even though they have Toms driving license and Tom is able to half the fine which we pay on the spot. Our journey is continued in less good spirits.

An approaching car signals us and we see another police set up for speeding ! Luckily we were not driving too fast.

Another police set up for speeding!

And another! We are really cautious now, unbelievable but feel that now we must have already had our bad luck for the rest of the day.

Bought some bread and honey from stalls at the side of the road for breakfast. Also noticed that the Mosques are a bit different than usual. The round ceiling and minarets are similar to regular mosques only not so high and remind us of a Rubix Cube but it is the building that astonished us; it looked like a barn. Maybe that's why there are so unbelievably many horses in this country.. They can practice their religion in the same building as their keepers.

We lost count of the cops on the side of the road. But we get stopped by a cop again. He claims we did not have our lights on and that that is mandatory in this country so the same story; he either takes your license or we pay the fine right here. 500 somoni it is.

Made it to the border, just a quick fine for not stopping at a stop sign and we are almost out of the country. Tom goes on foot, Saskia takes Boris. After Toms passport is checked he is now standing in a 100 meter long line with almost 400 people in front of him. This can take a while.