He probably is nervous for the big trip. A big Thanks to Nicole and a mechanic of the ANWB who came to help! We're still not sure what the problem was but at 12:15 he started. Quickly we drove to HH4 to grab our stuff and hug and kiss everybody who was there! After a quick check we finely drove off toward Mongolia at 13:36!

Heavy rain combined with lightning in the sky. Damn no weather to drive these bad roads in the Czech Republic! And specially not the place, time or weather to discover that the passenger door is leaking!! At the first stop we fixed it with duct tape! Onwards through to Magyarsorsag.

After waking up from a quick nap Saskia accidentally put one of her contact lenses in using cleaning fluid instead of incertion fluid. And guess what? It hurt like hell! Sas won't be able to drive for a while...

It's hot and crowded and we saw our first gun! Whoop! Boris is doing well in these temperatures! Another Dutch guy pulls up next to us. "Where are you going?", he shouts. "Mongolia" Tom replies. He now is looking at our car like we are some new kind of idiot he did not know before! Further along the queue a German guy pulls up waving a platter around covered with dolmades! He offers us 1,2,3 4 take what you like! They were very tasty.

As we pulled in for gas at a local petrol-station in Serbia Boris starts leaking. 5 mechanics come rushing to the car! After popping the bonnet one guy pops the lid of the cooling unit which resulted in a spray of hot fluid al over the place. We could all step aside just in time. After pointing at stuff, shaking there heads simultaneously, mumbling things in a language we did not understand, they decided to refill our cooler with water. All of a sudden the fan started up and everyone smiled. It seemed to mean all was good and we were back on the road within seconds.

The sun is going under and that means Sas can no longer drive because of her aching and slightly infected eye. While switching sides we noticed the whole car was covered in oil! Apparently our jerry can of motor oil decided that leaking was a good thing to do and thanks to our roof rack and the wind it had now covered the whole back part of Boris. A great new, corrosive look!

After a good night sleep of 4 hours it's time to get back in the road. But first a quick fix on the drivers door. It wouldn't open from the outside anymore. Just a minor problem which Tom managed to fix in 30 minutes and just 23 swear words! So that's quite good! So now it's time for the last kilometers in Europe, which went surprisingly easy considering we did not bring a map of Europe, just the directions that Sas' mum had written out for us!

They just wanted to check the car in hangar D3. What!? Oh f*ck.... Well in real life it meant they wanted to touch 2 bags, take a picture of Boris and then say it's all good... Right... "Baggage check". 13:24 We are traffic jammin across the Bosporus and are now officially out of Europe within 48 hours! Score!

Team 2C some yaks had broken down and The Strollers we convoying with them. We pulled over to see if we could help. But the problem was inside the engine. So they will be stuck for some time! After we helped the Strollers connect there new lights properly we were off to our stop for the night at Bartin where we arranged to meet up with another team who Sas had met in Sydney last year.

Lovely meal at the side of the road. Unbelievable how many petrol stations are on this road, every 10km. Time for Boris to cool down as the sun goes down. In these Turkish mountains our top speed is 60 km/h in 3rd gear. Not so good for Boris. Keep it together buddy, you're doing great!

We have arrived and finally meet Martin, Dan and Hanna at a lovely guest house in the mountains in the middle of nowhere. Extremely idyllic and Efteling/Droomvlucht-esk. After some beers, raki and loads of laughs we head off to bed to be fresh in the morning.

After a lovely breakfast and the usual photoshoot with Boris we were heading out in our first convoy. And we must say Boris did well against the 4x4 panda! Martin and his team decided to take a look at a canyon nearby so that was our cue to head on alone. We are on quite a tight schedule.

First routine check up with gun in the mountains. They liked Boris, couldn't believe it was Sas in the picture on her Iranian visa and sent us on our way. However, it was difficult to really make progress because Boris was having a hard time in the high mountains. Our top speed was 40km per hour in second gear.

Sas spots a PPT post office and seeing as we had not been able to acquire a vignette for the Turkish roads, this was perfect. Only 1100km and 32 hours late! There are two friendly ladies working and with the help of Google translate we ordered our vignette! We had to wait a bit and got offered baklava and water.

After cruising over the motorway by the Black Sea we had to find a place to sleep. After two hours of searching for a safe place Tom spotted another rally team. We have adjusted quite well to the local way of driving so we braked and reversed on the motorway towards the petrol station. Han Polo and the Mongolian Falcon had a flat tire and were resting up there. We parked next to them and had a good nights rest.

back on the road again. Next stop; Georgia!

Standing in the back of a 2km long cue for the Georgia border... This might take a wile. 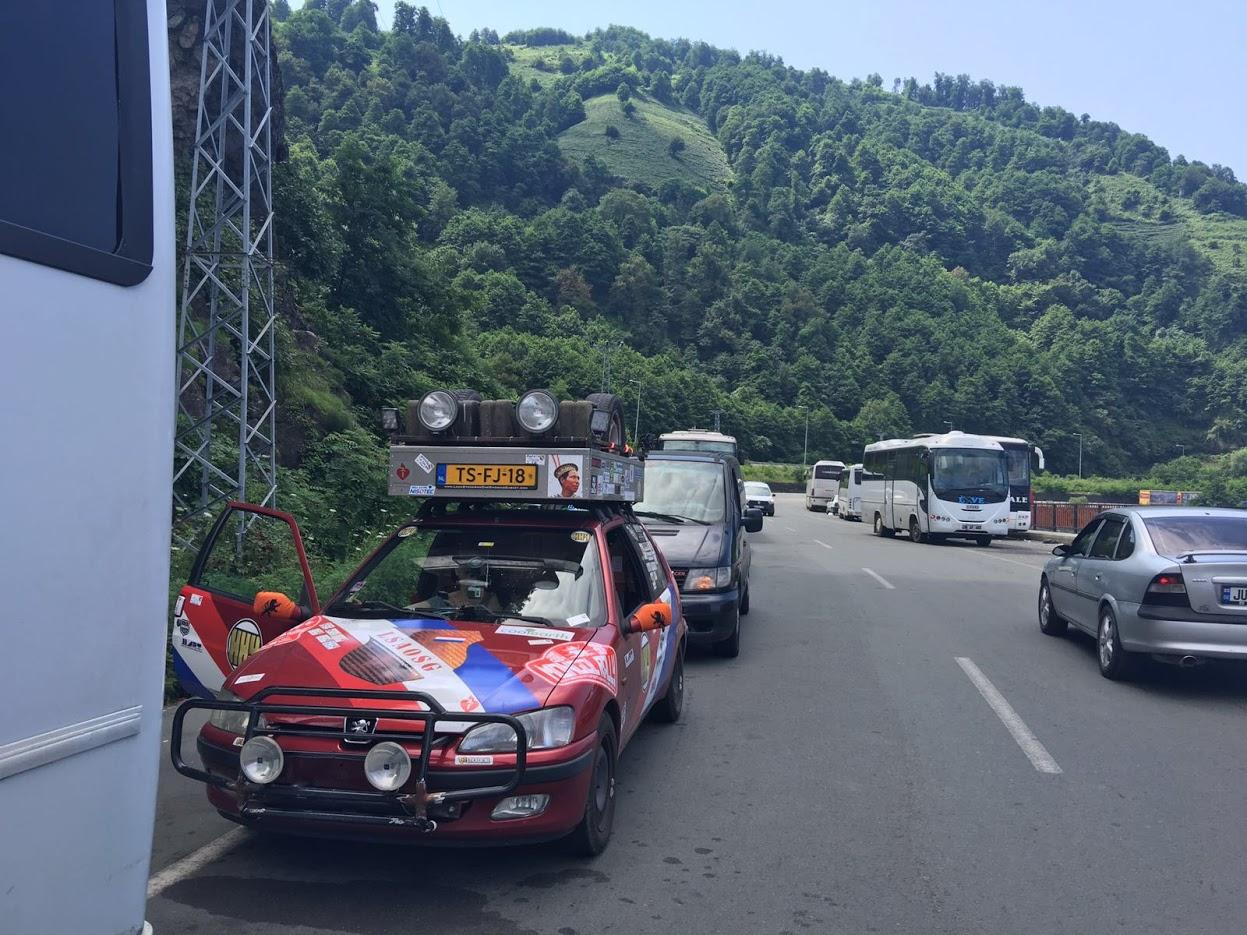 Read the next series of updates here!