One police car even has the same bull bar! Quite near the border an armed guard came to the passenger window, looked at us through dark sunglasses holding his gun and asked if Saskia was married. "No, I have a boyfriend at home" she replied looking straight at him. "Ok" said the guard and he walked away.

Leaving a total of at least 6 teams behind in the queue, good luck lads! It only took us about 5,5 hours of mainly waiting... On the other side of the border everything is organized to get the money of Turkish tourists. Casinos, liquor, lap dance venues, betting, disco and God knows what else. A few kilometers out we find a ATM which even gives dollars.. Finally, we have some dollars. We have been wanting to get them for a while as we didn't get round to this back in NL and it will be vital in countries to come.

The S2 goes south and then up to Tbilisi so that seemed like the best road to take as the S1 goes north all round the houses. S2 it is, how bad could it be?We had no idea what we had done but as we were driving a mountain road in Georgia the tarmac went from bad to worse. But we drove on. At 18:30 however, we realized that we might have made the wrong decision! No lorries or other traffic for the last hours and the people we passed looked as if we were from a different planet! When we come round yet another corner two children were standing ready with their camera of their phones pointed at us; they had been warned that a mighty machine from the future would come and they should document it for their grandchildren! The roads became worse; all rocks and loose stones and pebbles. Nothing that even resembled Tarmac for ages now. Steep hills for Boris to conquer! And he bloody well did! As the sun was going under we were still climbing and Boris was shaking all the way. We were now driving for 2 hours straight at an average speed of 30 km/h. We were now at the top of the mountain, we guessed, because the visibility was like 10m due to the clouds and heavy fog. And we had reached the top of a ski slope! Best ski area in the whole of Georgia, who would have guessed. With lifts and everything. Near the top there were a lot of guys at the side of the road selling their merchant; honey! As you do, near a ski slope at this altitude. No matter that no normal human being would come by this place whatsoever now....?! Tom was driving like a race driver and good at it avoiding boulders, cracks in the road and the occasional waterfall / river. But after Boris took a huge jump, there was a sqeeky noise at the left rear side. A flat tire we thought but after looking for a level spot to stop we concluded that the tire was ok. Further investigation showed that the wheel flap which protects the rear bumper was stuck on the front side of the fender; and just for the non- mechanics; that's not where it's supposed to be. "Sas do we need this?" Tom asked. "Nope" and so it's gone now. After that we were heading down hill. A good thing so Boris could cool down. At this point Saskia has tot tell Tom when there would be a corner according to the sat-nav because we still can't see further than just over the bonnet. We did see some cool waterfalls on our way down, ow and we hit a hedgehog... Boris won... After a challenge totaling 5 hours and 120km we finally hit the tarmac again. Lovely, lovely tarmac and the persistent shaking ceased.

While driving past Tbilisi we saw some huge ass castles, buildings and bridges. Very majestic at night as everything was lit up in fluorescent lights. At 00:00 Tom was driving for 9 hours straight and he was done for that day Saskia took over for the last 80 kilometers to the border. Her vision was still not great but enough to survive and Tom had a nap.

The guards stood on sedgeways and pull us out of the line the moment they see us. As we start talking to them a sniffer dog is wandering around Boris to check him for drugs we guess. As we talk to the border control guys it turns out one of them will come to holland for a judo tournament in a couple of months. This was mentioned after Sas told them she had a boyfriend and what his occupation was.

Tom awakes from his well deserved snooze, sleeping in the upright position in the passenger seat while Sas stayed awake in the queue to the Azari border. The guard orders Tom to get out of the car. It takes him a while until he understands he has to go over the border on foot as only the driver can take the car across. Inside there is a small queue with baggage control. Bags are moving in all directions. Towards the control point, and backwards as well. Weird.... Over gates and passed through to people. Everyone seemed to be very busy waiting and discussing. Working his way past the groups of people he just had a quick passport check and he was in his 10th country. Saskia went her own way with Boris through the gates. She received a small note that said she was a girl in a Peugeot 106 with license plate TS-FJ-18. Driving slowly towards soldiers everyone started looking up with astonishment. She then drove in the wrong lane which got everyone's attention. A guard ordered her to another lane. Boris stalled a number of times before moving to the right lane. Sas got out when Boris had moved and all the soldiers started asking questions in Azari. No clue as to what they were saying until one of them started talking English; papers, passport, visa. Everything was handed over and they wanted to know what her business was, laughing at every word. She was told she was the third rally team that had come through. The check and payment for roadtax and insurance went quite quick and she even got some coffee for the road. The next question was if she had a boyfriend and wanted to stay in Azerbaijan. She declined friendly and they sent her on her way. One more guard and gate and she could even see Tom was already waiting on the other side in the heavy rain. 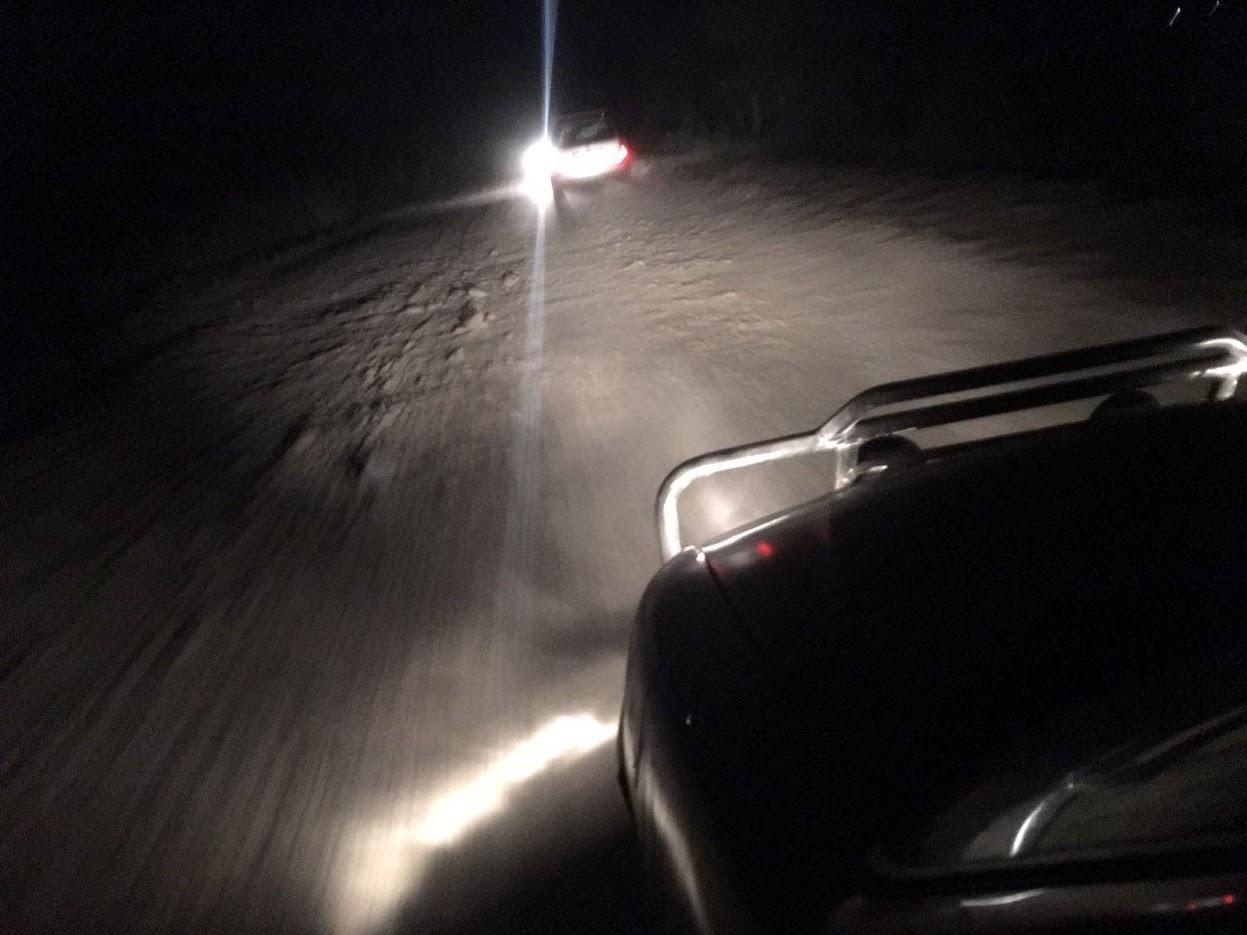 We are both officially in Azerbaijan; time for Saskia to sleep. Tom takes over the wheel and drives off towards Baku, the capital. As the sun comes up he sees... Nothing, left or right, just loads and loads of nothing. No trees no mountains. Just sand and bushes. And believe me after 3 hours of this everybody is tired. So, hazard lights on, park Boris on the hard shoulder and go to sleep for a few minutes. Sas takes over when we awake two hours later; onwards to the capital! More endless planes of nothingness to go! And a whole lot of Lada's!

We've decided that Azerbaijan is a playground for architects. They can draw the buildings and than someone tries to build it. Usually then at some point they conclude it can not be done and so the unfinished building stays unfinished. And if it works they copy the building and paste it for an unlimited number of times. Just like in Simcity. So basically Azarbaijan has a lot of unfinished buildings and loads of the same buildings in all different shapes, sizes, styles and colors. Also; a lot of heavy industry, like oil refineries and gas. One big mass of pumps and pipes in some places, extremely science fiction like.

Found the hotel in the old city of Baku, which is actually surrounded by a grand brick wall. Very cool. Boris is parked up front so we can see him from our window. After taking our first shower in 6 days we head on down to find something to eat. And we did. We had some lovely little snacks and nuts with some nice and cold Azerbaijan beers! After this it was chilling in our room, clearing the GoPro and organizing our music for the rest of the trip. And realizing how far we had already come in such little time. Quick messages to home and falling into a deep sleep. Tomorrow we head to Iran!

Time for breakfast in our hotel. Fresh bread and some lovely cheeses were on the menu. After repacking Boris we head off!

Driving through Azerbaijan, in the land of the Lada's, Boris is king. We can even overtake many of these Lada's, not feeling terribly slow anymore. The road are good by the way, the pedestrians not so much. They cross the road where they want and whatever speed they want. Not safe at all! At 11:15 the police make us stop... O God, hope they will not hold us for long.. "Passport please"... And after a brief look one said "Ok you can go". Hmmmm, not what we were expecting. A bit disappointed we drive onwards. 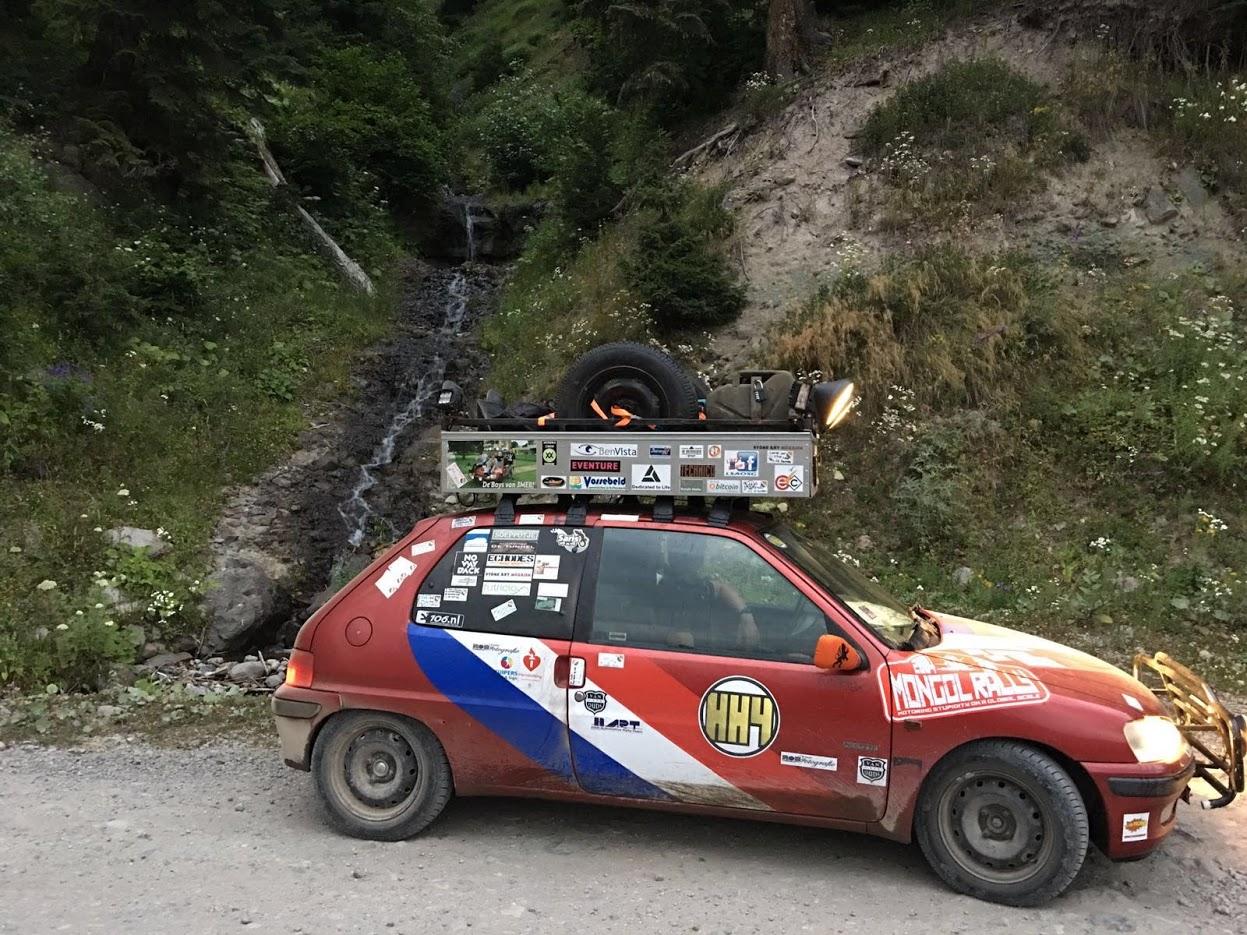 quick stop in Digah, a city near the border. We're going to try to get some more dollars before we head in to Iran. On our way we tried 2 ATMs that provide the option withdrawing dollars, but they were both empty. In Lankaran we have more luck. At an ATM in a Bank Tom manages to get 800 Manat, which we can change inside the bank to dollars. The only difficulty was that the ATM would not give out more then 100 Manat at a time. So that's 8 transactions to finish the job. As he returns to at the car Saskia said to him she was going to buy a burka across the street. While Tom waits he fixes one of the relays of the car that was loose. Sas has a new experience; bargaining and buying when there is no mutual language. It also got taking used to that the entire (all female) staff help her undress and dress. No privacy whatsoever! One dress is perfect but too long so after she has paid they take her to a seamstress to shorten it. She is ready to enter Iran!

The Azerbaijan border control guys are very friendly. Boris gets checked again. And our documents get a checkup as well. Facial recognition is used to determine whether we really are who we say we are. And off we go, we are now out of Azerbaijan and in no man's land. A couple of meters further we cross a bridge, on the other side 6 Iranian soldiers walk towards us with guns around there necks. As we stop our car one of them looks in the car and asks for our passports. After trying to pronounce both our names and asking Saskia what her fathers name is he hands back our passports..... "Welcome to Iran!!"